My journey has led me to realize that I have an amazing number of connections related to King Arthur, Camelot, Arcadia, the Knights Templar, and the Masons. I will try to organize and list them here.


Where I Currently Live

Where I Was Born

"Numerology originated among the Jews of biblical times and among the mathematicians of ancient Greece." (Page 192) 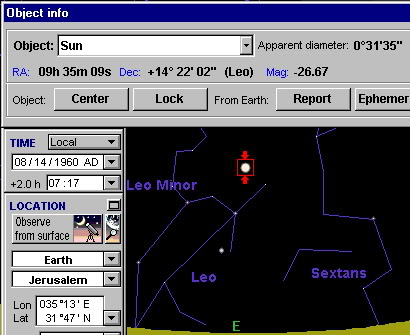 
The SUN & The SON / Sacred Masculine & The DAUGHTER / Sacred Feminine?

According to The Da Vinci Code, the symbol of the Star of David (Seal of Solomon) also represents the "sacred masculine and feminine" and is also a symbol for VENUS. (page 40) Also, "VENUS traces a perfect pentacle across the ecliptic sky every 8 years." (page 41)

Also, at the exact time and place of my birth, Leo has just completely risen in the East. 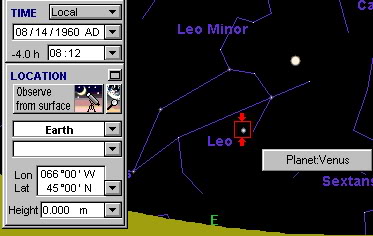 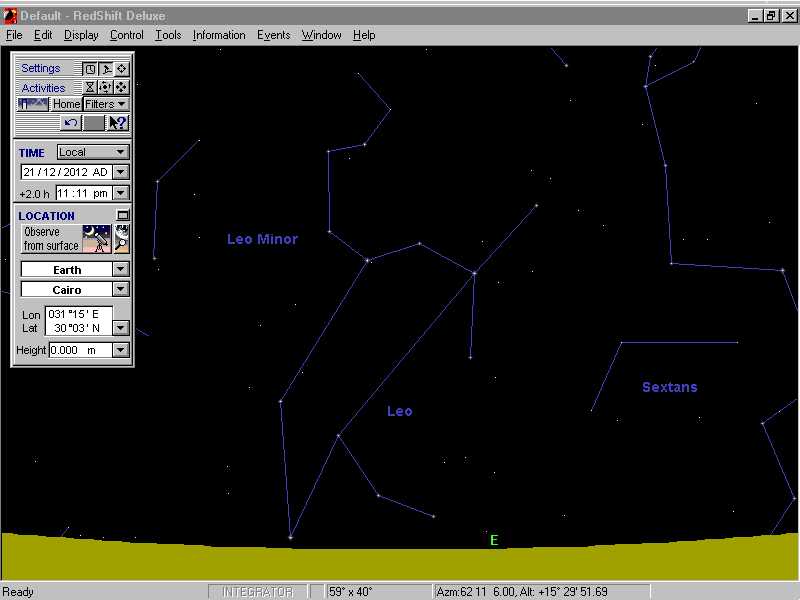 Another 'The Da Vinci Code' Connection


And Another 'The Da Vinci Code' Connection

On August 5, 2008 I watched The Da Vinci Code movie again to see if anything caught my eye that I had missed before.

And did I ever! An amazing 11:11 connection that I had not seen before. I have not heard or read of anyone else mentioning this...

It was near the end of the movie. Robert Langdon and Sophie have just followed the final clue to the Rosslyn Chapel in Edinburgh, Scotland, and Sophie has just learned that she is the last living descendent of Jesus Christ:

Your name was never Saulniere. It was Saint-Claire. It's one of the oldest families in France. It's from a line of the Merovingian kings. Sang Real ... Royal. Blood.

I was so wrong. Saulniere (The Grand Master of the Priory of Sion) didn't want you to help guard the secret of the Holy Grail.

Sophie ... You ARE the secret.

You survived the accident. If it even was an accident. The Priory found out and somehow they concealed the fact that you were alive. They hid you with the Grand Master himself who raised you as his own.

According to all this ... Princess Sophie ... you are the heir. The end of the bloodline. You are the last living descendent of Jesus Christ.

Robert and Sophie then go back upstairs in the Rosslyn Chapel and are met by the members of the Priory of Sion who have been summoned to the Chapel. In the background behind Robert and Sophie are two stained-glass windows - each with 11 on them. An amazing 11:11 connection.

Is this another major clue that 11:11 is connected to the bloodline of Christ?

(Although you can see the 11 - 11 in the following picture, it is much clearer and makes much more of an impact when you see the actual movie.)

I looked on the Internet to see if I could find any pictures of these windows. I believe I did. There are two sets of two windows, each with 11's on them, so 11-11; 11-11. See here and here. They appear to be located on either side of the "Apprentice Pillar."

And this makes yet another connection to the possibility that the Holy Grail refers to the bloodline of Jesus Christ. The Apprentice Pillar is thought to perhaps symbolize the double helix of DNA, thus symbolizing genealogy and bloodline.

So we have the Apprentice Pillar, symbolizing DNA and bloodline, with two stained-glass windows with 11-11 on either side, and Sophie, standing beneath these 11-11 windows, who has just learned that she is the last living descendant of Jesus Christ.

So many synchronicities and connections all seeming to point in this direction...

There are an extraordinary number of connections between Dan Brown's The Lost Symbol and my theory.

August 10, 2007 is the 222 day of the year and it will be our 22 wedding anniversary. My husband and I were born in the same hospital 6 days apart but we never met until 22 years later.

While doing some more research on the Internet on the Knights Templar I found several other interesting connections:

Today I used Google Earth and using the 'Ruler' tool, placed one end on our new address at 44°44.444' N and the other end on the center pyramid (Khafre) at Giza, Egypt.

Then I followed the route between to see if the line intersected any locations of interest:

A couple more movie and personal connections that I just discovered...

I have not updated my Chapter 18 (my documentation of events and syncs that I discover and experience) since December 21, 2012.

Many events and syncs continue to occur worthy of documenting (pretty much on a daily basis), however, I decided not to continue to do so after that date.

Yesterday I posted the above information here in my King Arthur chapter. This morning I decided to look at my Chapter 18-24.

I was amazed when I saw the counter reading, especially after what I had just posted about... 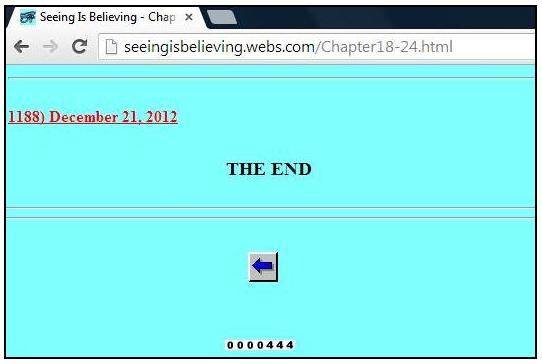 Another interesting sync to note is that on the same day that I posted the above information about the movie 4:44 Last Day On Earth, which is about the world being destroyed at 4:44 by deadly solar and cosmic radiation, a CME - from the strongest solar flare yet of 2014 and one of the strongest of the current solar cycle - hit Earth at... 4:44 pm UT:

It is interesting that on the very last day of the year - December 31 - the SUN sets at 4:44 pm local time in HALIFAX, Nova Scotia.

I am not sure which is more symbolic... 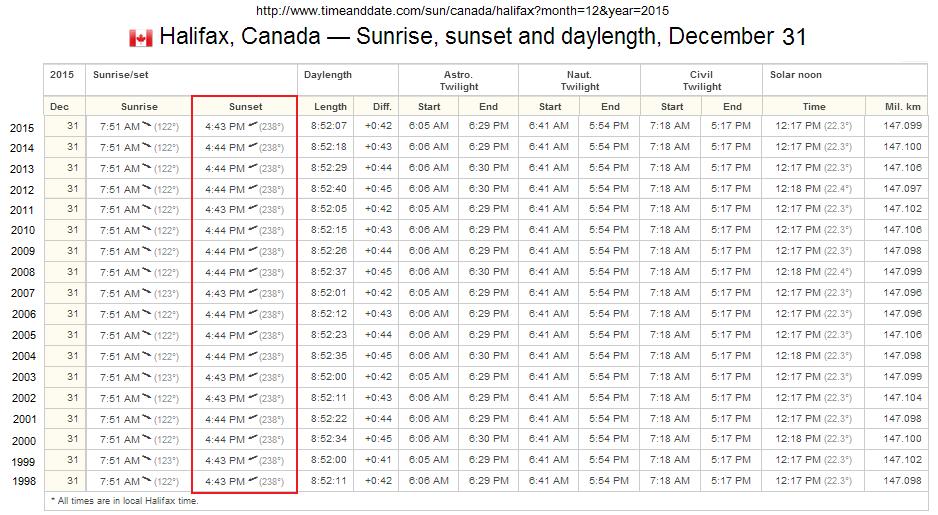 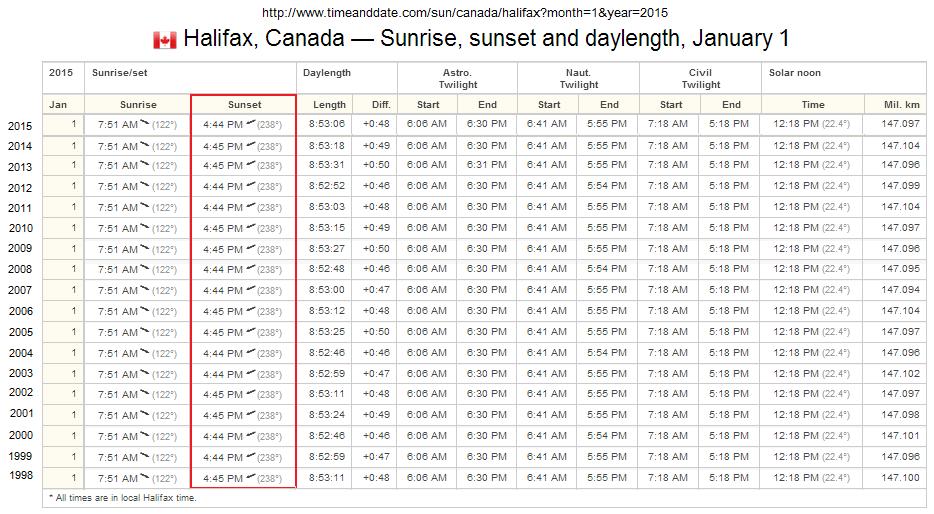 On June 6, 2015 my oldest son got married in Moncton, NB where we lived for eight years prior to moving to Halifax, NS five years ago.

(Moncton was a place full of overwhelmingly amazing synchronicities connecting to my King Arthur/Holy Grail connections, as I have documented in this chapter.)

The rehearsal dinner was held the evening before at The Moncton Club, where the bride’s parents are members. The bride’s mother took my husband and me on a tour of the beautiful building, and when we reached the top of the stairs, a picture on the wall in front of me grabbed my attention. 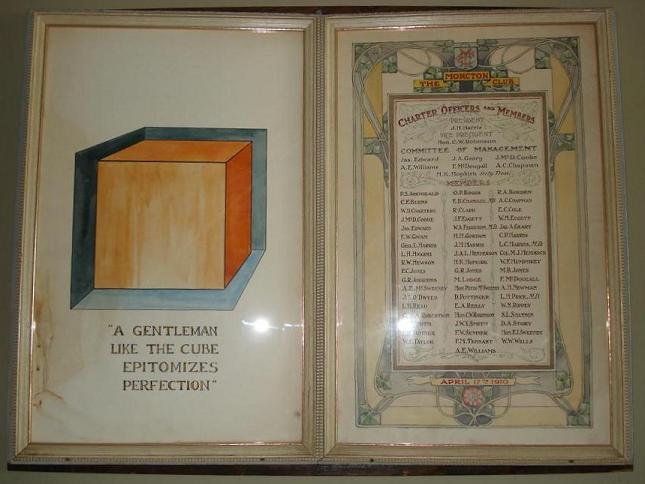 It was the CUBE that caught my eye and when I saw it I knew it was going to be something I was meant to see, and that I was meant to be at this place at this time in order to see it.

As I read the words below the CUBE I was amazed... “A GENTLEMAN LIKE THE CUBE EPITOMIZES PERFECTION”.

I could see immediately how this connected to my theory and diagram/model of The Mind of God (and The Way) - which I have portrayed as a CUBE.

(Even their CUBE is drawn using the same perspective as mine.)


“THE CUBE EPITOMIZES PERFECTION”... This confirms and affirms my CUBE theory/diagram of the Mind of God – which IS the PERFECT Mind!


Once again, combining Philosophy and Science to explain God...


Which is exactly what I have done. 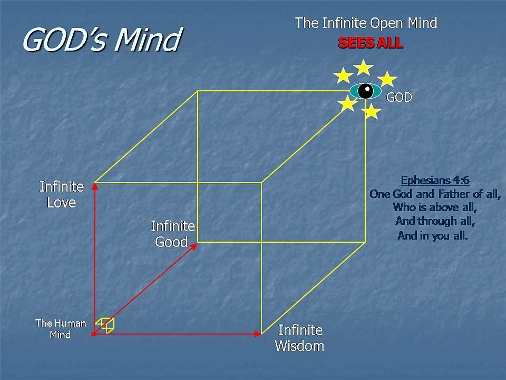 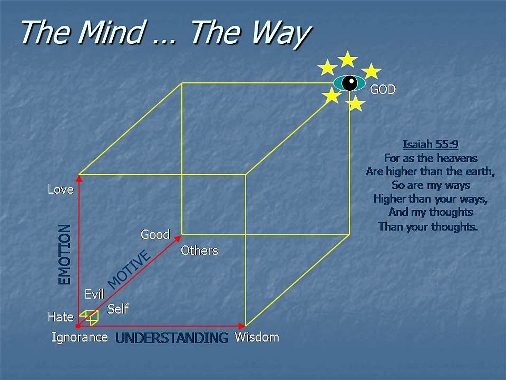 The Slideshow Presentation of My Theory

As I inspected the picture more closely, I saw that it was actually two connected framed pictures side by side, the one on the left being the picture of the CUBE, and the one on the right the framed original Charter of The Moncton Club dated April 17, 1910 listing its Officers and Members.

Of course I wondered if there were any members named HARRIS which would make this an even more amazing connection, and sure enough, there were four.

And not only that, but the PRESIDENT was... J. HARRIS!

And connecting to genealogy, another thing that caught my eye was how the letters of logo of The Moncton Club are the same as the initials of my two children, Tyler and Craig Mullen.

That very same night on Jeopardy one of the categories on Double Jeopardy was 'KING ARTHUR' and one of the questions referenced the GRAIL, or more specifically, the GRAIL FINDER.

One of the new contestants was Darren HARRIS-Fain, who answered the above question correctly. He also won the game. 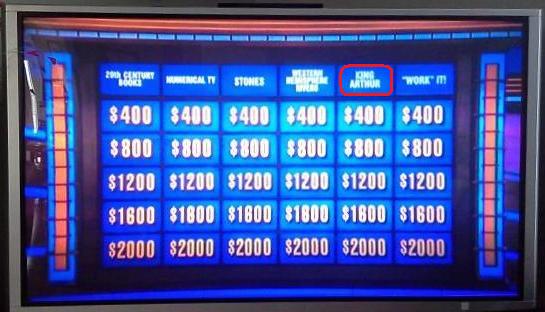 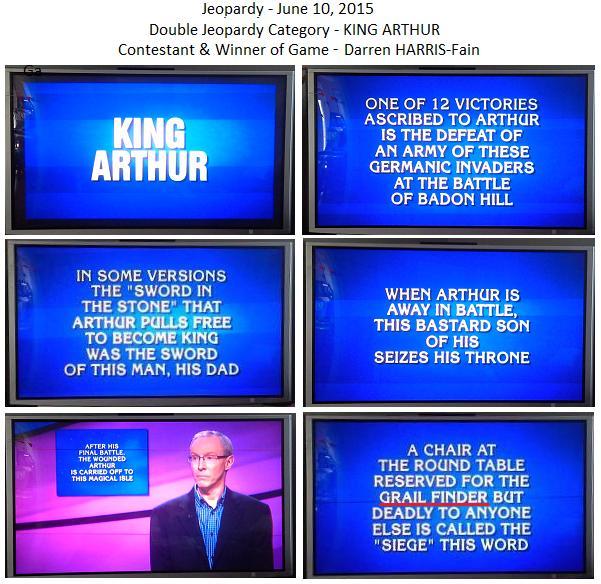 The next night on Jeopardy, on June 11th, one of the categories on Double Jeopardy was ‘11th HOUR CLUES’. 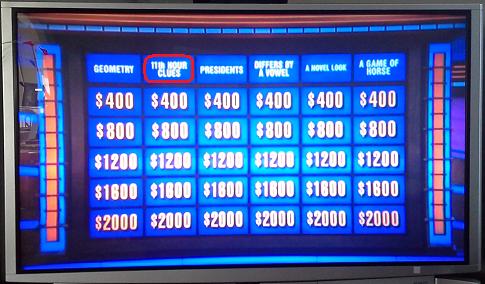 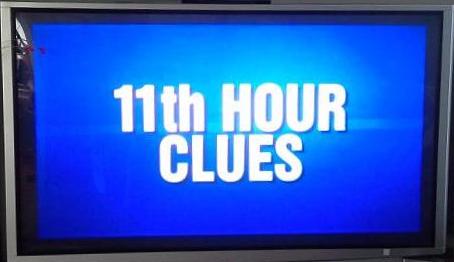 On June 15th's Jeopardy, during the segment where the contestants tell a story about themselves, Darren HARRIS-Fain said his wife's name is JULIE.

(This was Darren's last game. Connect the dots.)

This eclipse was a rare event for several reasons:

- Total eclipses of Super Full Moons are rare.
- This eclipse was the fourth and final eclipse in a series of four total lunar eclipses called the lunar tetrad.
- This eclipse was a Blood Moon which is connected to Biblical End Time prophesies. (i.e. Joel 2:31; Acts 2:20; Revelation 6:12) 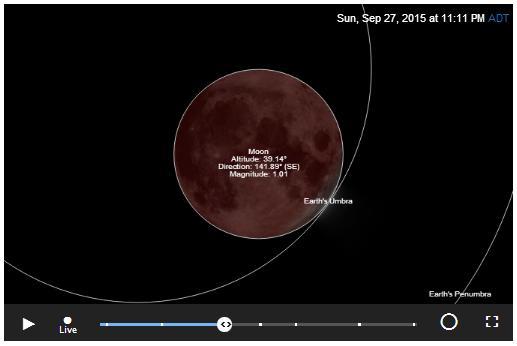 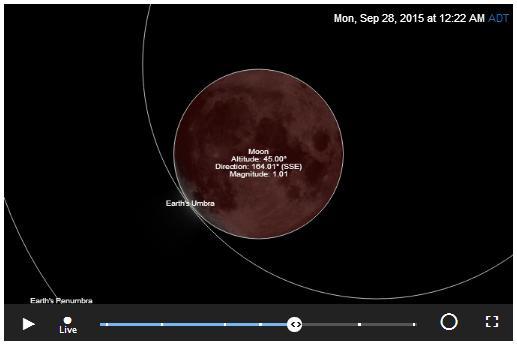 This was a very rare celestial event.

For the first time in over 150 years (in North America), a super moon, blue moon, and total lunar eclipse/blood moon coincided. It last occurred on March 31, 1866 and will not occur again until January 31, 2037.

As I wrote about in my Chapter 13 – 11:11, on January 7, 2018 I purchased the book ‘End Times and 2019’ ‘The End of the Mayan Calendar and the Countdown to Judgment Day’ by David Montaigne. He believed that December 21, 2012 would not be ‘The End’ but rather it was an important marker date in the End Times timeline of events. He believed that December 21, 2012 would be the beginning of the 7-year Tribulation period which would end on December 21, 2019, and on that day, a cataclysmic 7-day pole shift will occur, ending with Judgment Day on December 28, 2019. He bases his theory on astronomy.

His information inspired me to do some research, and I discovered something of interest connecting to this year – 2018 - which I explain in my Chapter 13 – 11:11.

But while I was using my astronomy computer program RedShift, looking for significant celestial events for 2019 – the year David Montaigne’s book is about - I found an event occurring on my birthday. It is a Venus Superior Conjunction (Venus - Sun) occurring August 14, 2019. (This is when Venus ends its cycle as the Morning Star and begins its cycle as the Evening Star.) 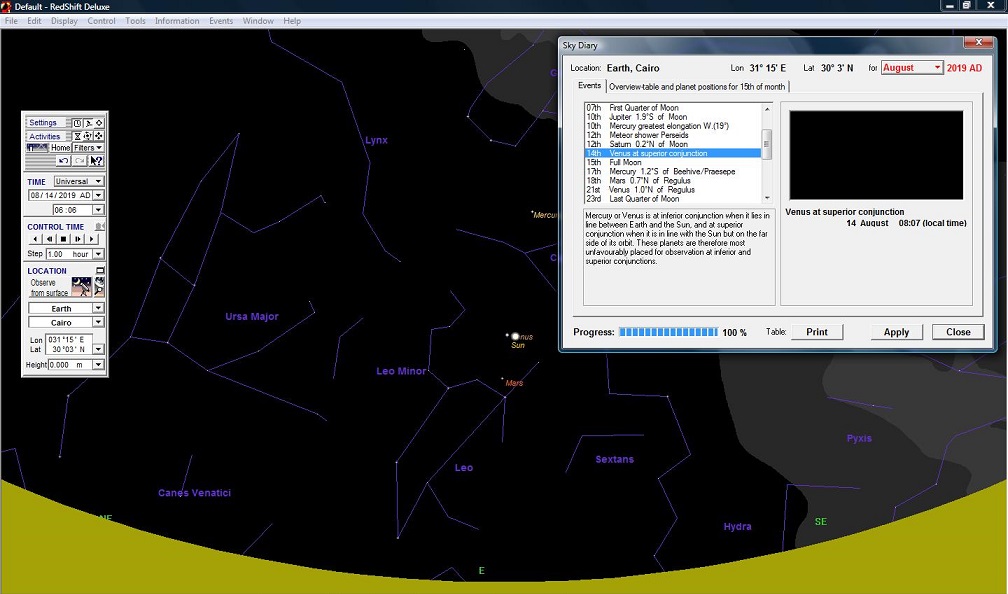 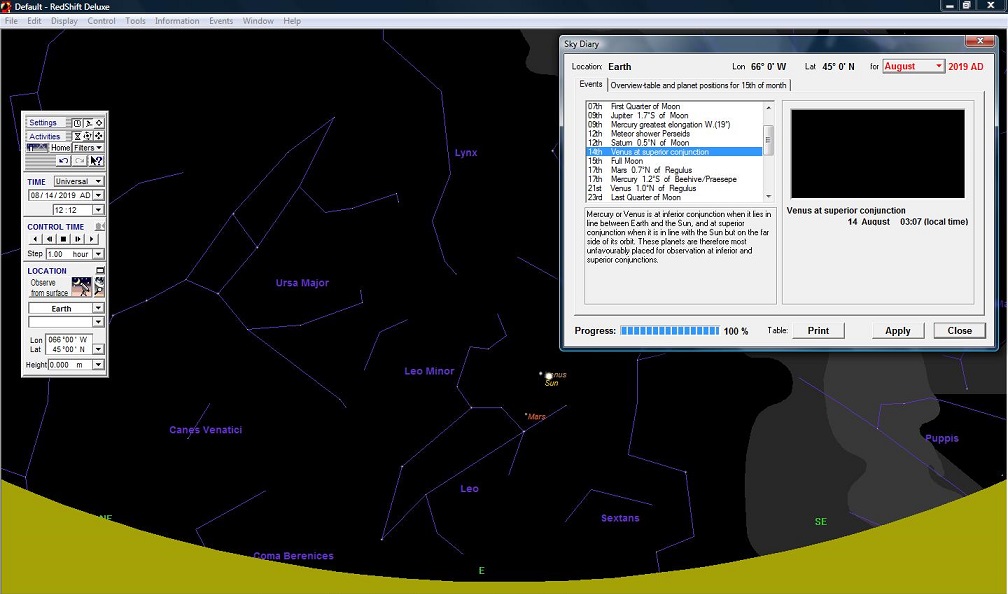 Here is a cut and paste from both of these sky views for a better comparison: 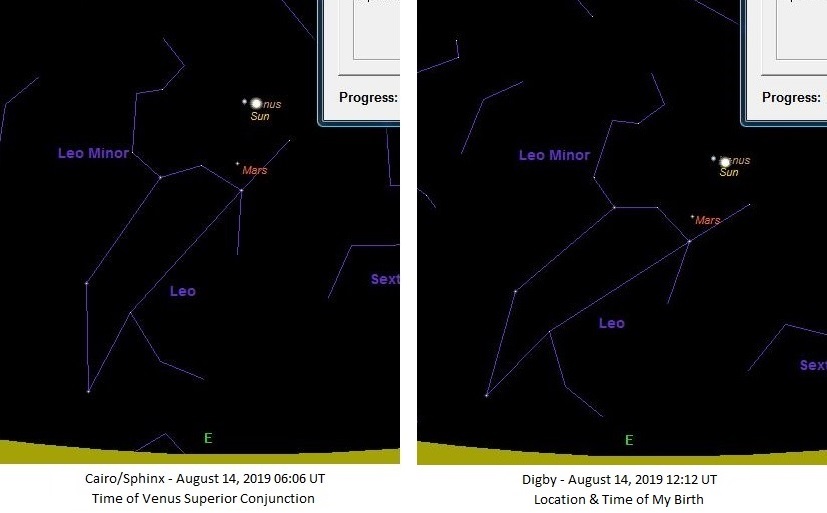 Venus was in LEO at that time as well. 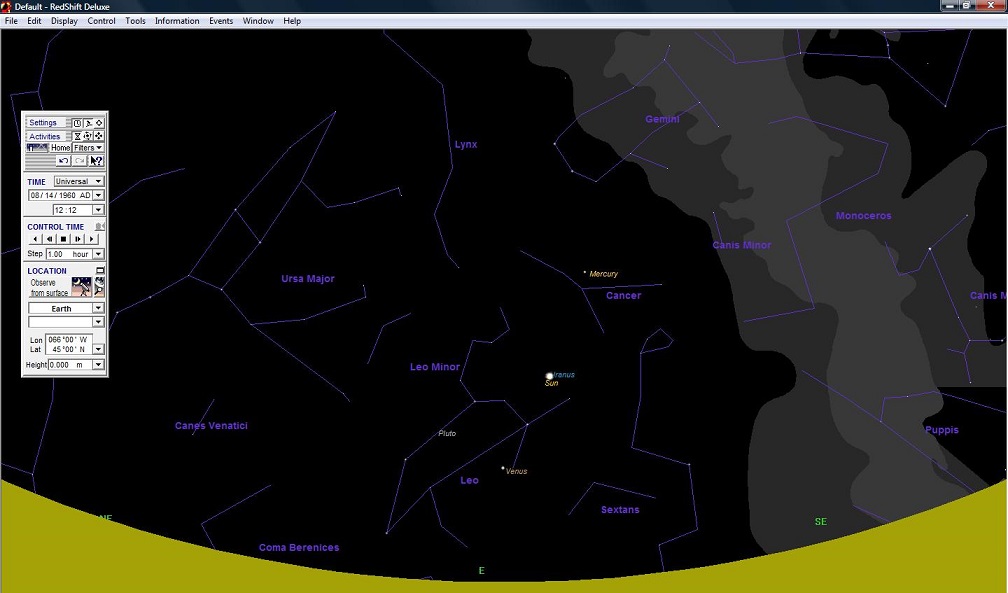 Here is a comparison of all three: