In order to figure out who you are, you must ask yourself three simple questions:

1) "How wise am I? How much have I learned? How much do I UNDERSTAND?" For example:

3) "What is my primary motive for doing whatever?"

These questions do not have to be answered exactly, just generally. This is very subjective, but the purpose is for you to figure yourself out, so answer honestly. Using a scale from low to high, you rate yourself. Once you have answered these questions, you plot your answers as a point on each of the three lines or axes of 'The Mind' diagram, 'Understanding', 'Emotion', and 'Motive'.

The process to plot yourself on the 'Emotion' axis is a little more complicated than the other two in that it is a two-step process as follows, however, it is not necessary to do this. If you wish, you may simply consider this an axis of 'Love', because, for all intents and purposes, that is exactly what it is, and rate and plot yourself accordingly. 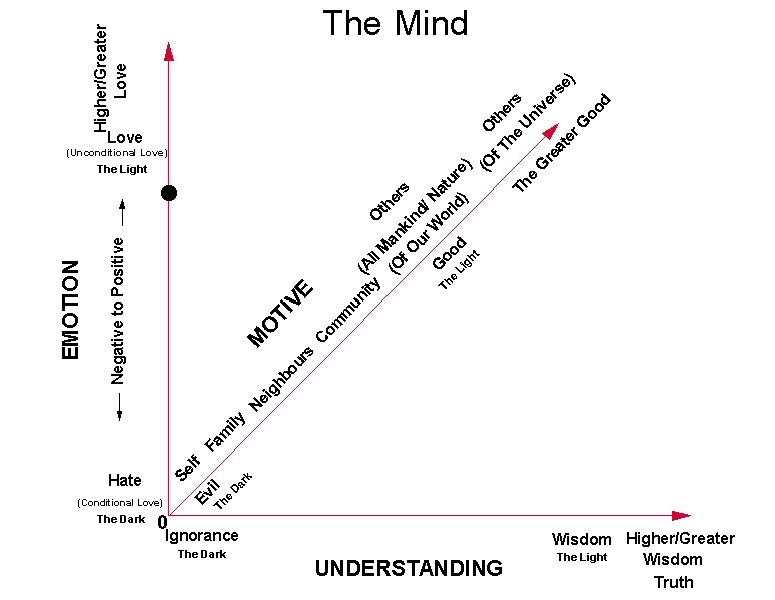 Continuing with this example, let's say you believe you are between medium and high on the 'Understanding' axis, feel you were raised in a very loving family and learned a lot of 'Love', and feel your motive for doing things is higher towards 'Others' than yourself. You would then plot these results on the graph as follows: 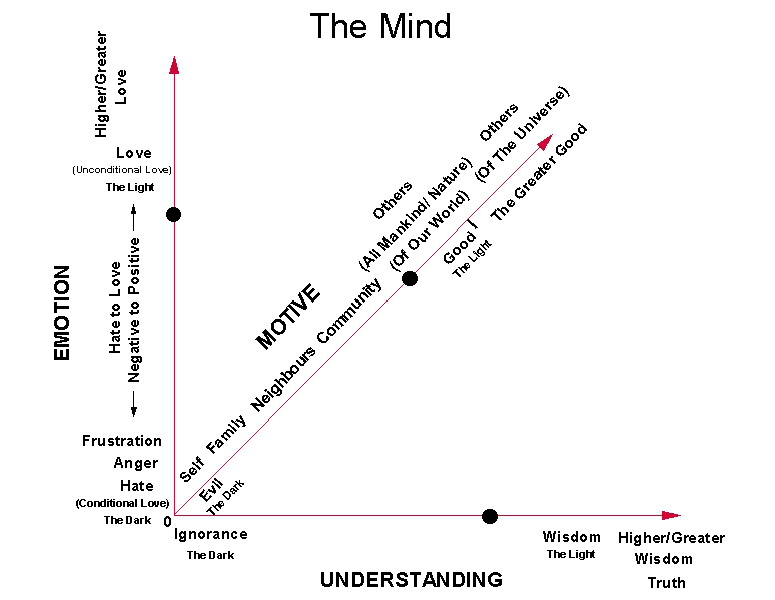 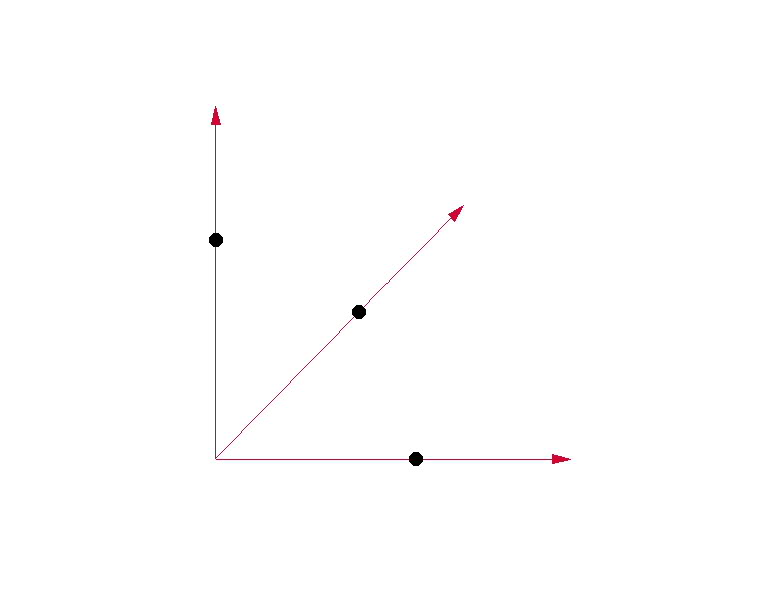 Once you have plotted yourself on each of the three axes, you can now draw a 3-dimensional representation of 'Your Mind' as follows: 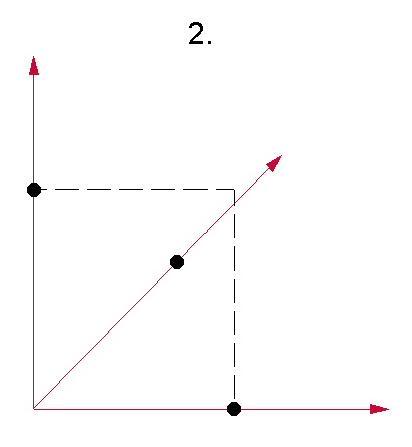 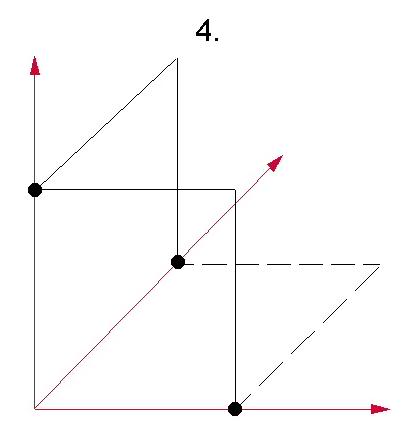 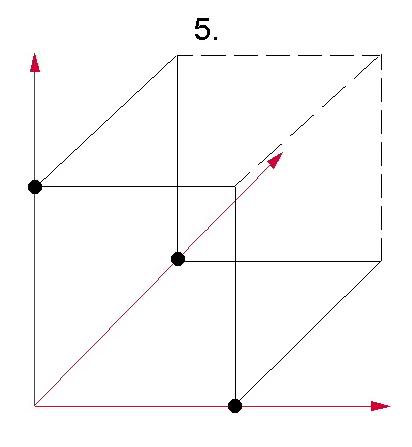 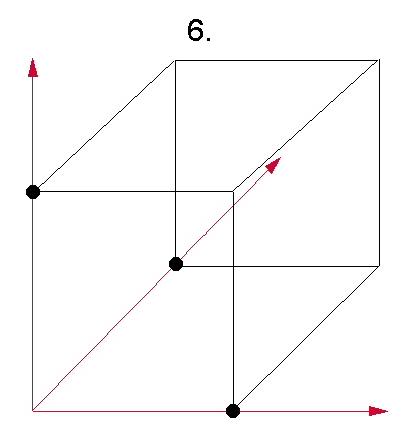 The following will explain this diagram mathematically, in terms of: 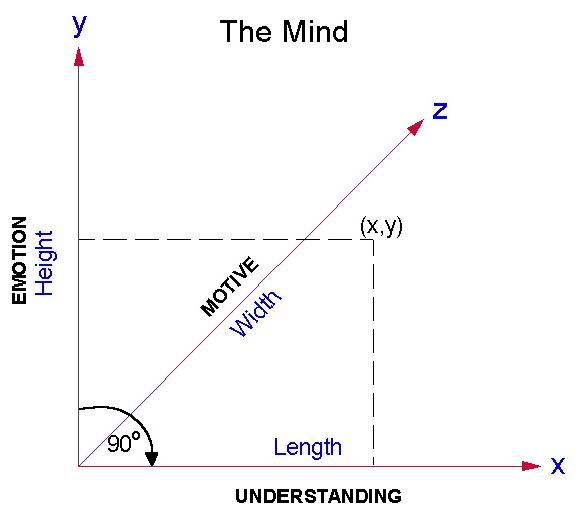 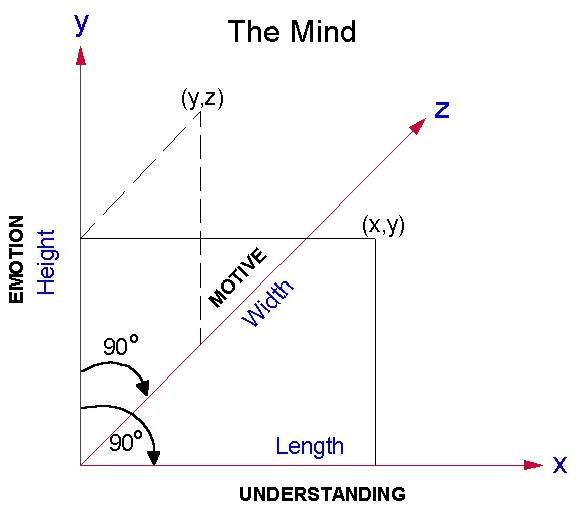 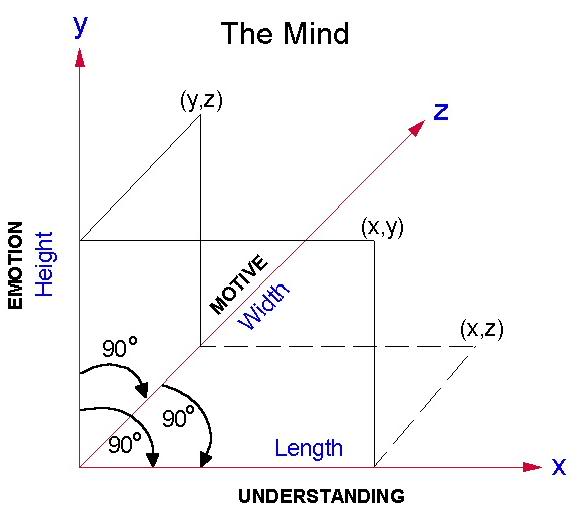 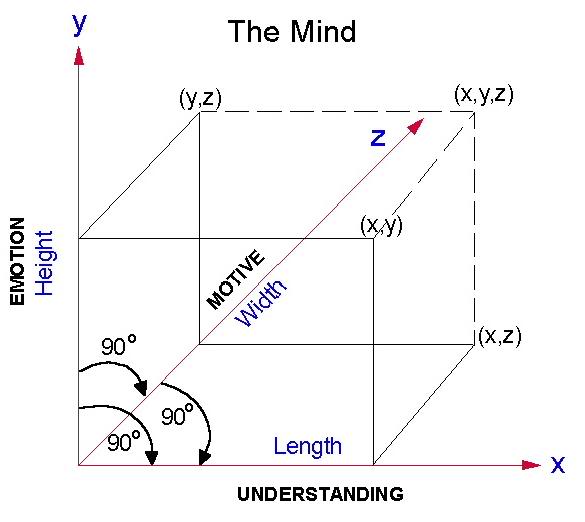 Not only have you drawn 'Your Mind', you have drawn 'YOURSELF'. You have now answered the question, "Who Am I?" 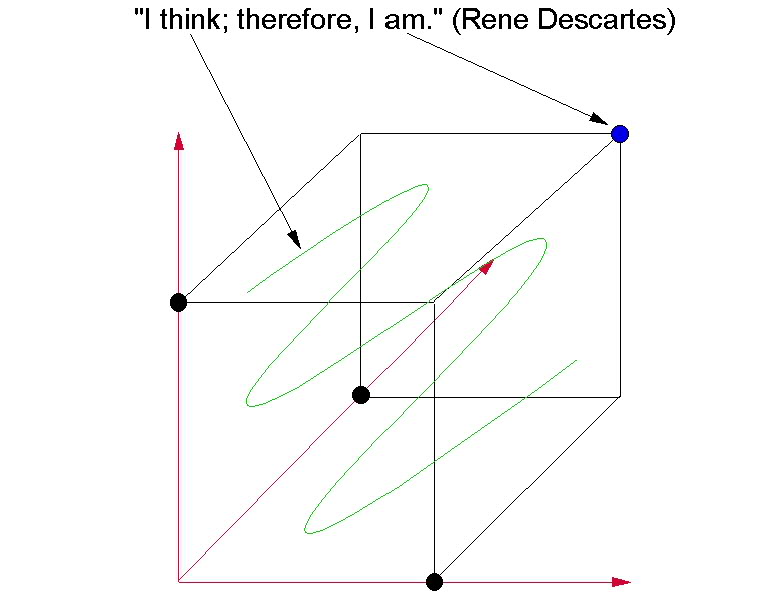 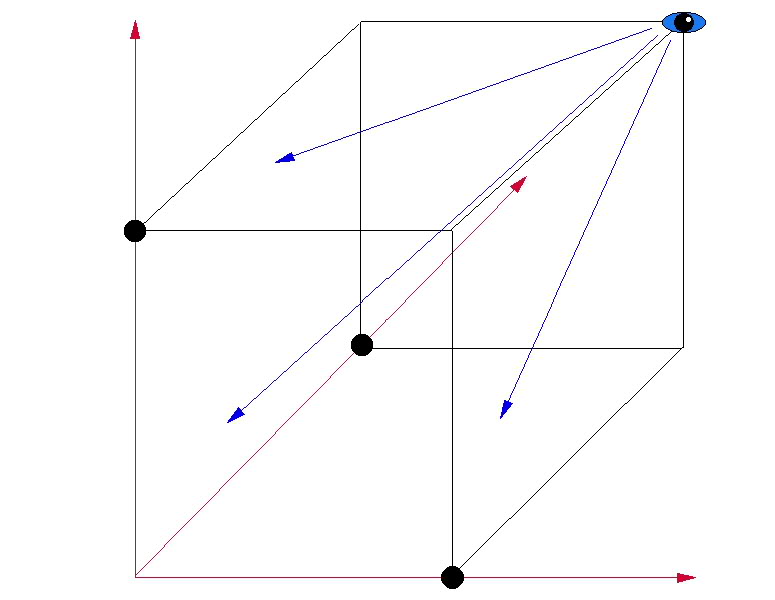 This box represents 'Your Mind.' This is your space - your world - what you "have" to think about. The point on the uppermost vertex (point x,y,z - the point where all 3 axes meet) represents YOU. This is you looking down into your world. This is your point of perspective of "seeing" (visually) and "seeing" (understanding).

Now that you know "Who you are," you can now understand yourself and Peace of Mind is achievable.

Based on exactly the same method as just described to figure out and understand yourself, you can also do the same for 'Others'. By others, I do not only mean individuals, but also groups of individuals: sectors of society, societies in general, cultures, nations, even mankind in general, remembering that these groups are, in fact, made up of individuals.

For example, if you know someone or a group of individuals who do not seem to display much 'Love', whose primary motive seem to be mainly for 'Self' rather than for 'Others',  and who do not appear to be very 'Wise' (even though they may be very educated and knowledgeable) they may be plotted on the graph as follows:

Once you have "figured out" others, then you can understand them, and then you can deal with and manage that knowledge from and with a different "perspective" - instead of one of misunderstanding, frustration and anger, one of understanding and peace, and Peace on Earth is achievable. 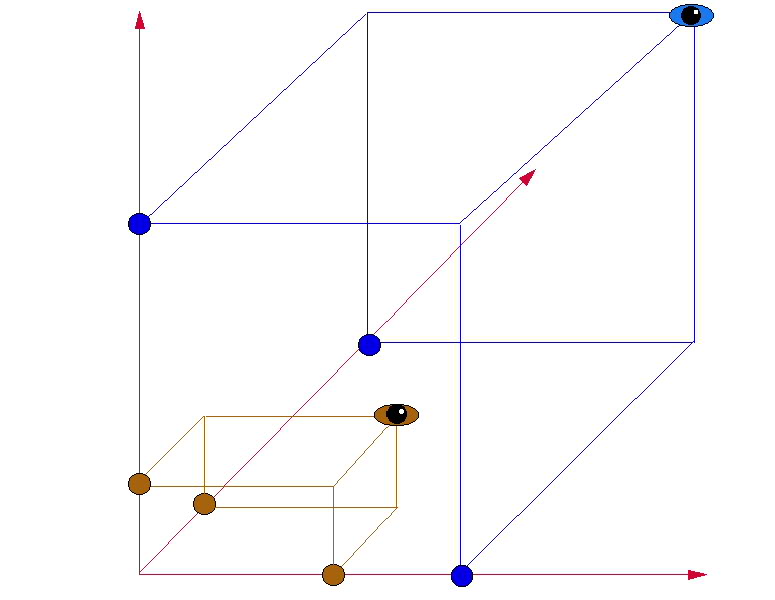 It is at this point that I will advance the science of this philosophy even further and say that the previous drawing representing 'The Mind' and 'YOU' is actually not a 3-dimensional drawing. It is, in fact, a 4-dimensional drawing. (Later we will see how this drawing actually expands into further dimensions - into the Spritual dimension).

It is here that I will introduce the concept of Space and Time.

The line does not end at 'High'. It continues into infinity with 'Higher/Greater Wisdom/Knowledge.

The line does not end at 'Love'. It continues into infinity with 'Higher/Greater Love'.

The line does not end at 'Others (of this world)' or 'Good'. It continues into infinity with 'Others (of the universe and beyond)' or 'The Greater Good'.

This concept is portrayed in the following Calvin and Hobbes cartoon by Bill Watterson: 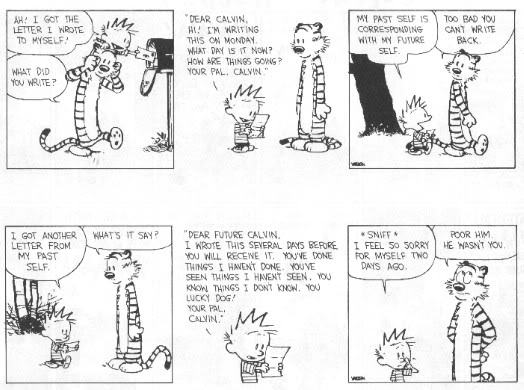 It's A Magical World. Copyright 1996 by Bill Watterson.


To portray the same concept using 'The Mind' diagram:

Your world of "seeing" (perspective) and "seeing" (understanding) is continually expanding (or not) into Time and Space.


The Time Machine H. G. Wells (An excerpt from Chapter 1)

'Can an instantaneous cube exist?'

'Can a cube that does not last for any time at all, have a real existence?'

Filby became pensive. 'Clearly,' the Time Traveller proceeded, 'any real body must have extension in four directions: it must have Length, Breadth, Thickness, and-Duration. But through a natural infirmity of the flesh, which I will explain to you in a moment, we incline to overlook this fact. There are really four dimensions, three which we call the three planes of Space, and a fourth, Time. There is, however, a tendency to draw an unreal distinction between the former three dimensions and the latter, because it happens that our consciousness moves intermittently in one direction along the latter from the beginning to the end of our lives.'

'That,' said a very young man, making spasmodic efforts to relight his cigar over the lamp, 'that . . . very clear indeed.'

'Now, it is very remarkable that this is so extensively overlooked,' continued the Time Traveller, with a slight accession of cheerfulness. 'Really this is what is meant by the Fourth Dimension, though some people who talk about the Fourth Dimension do not know they mean it. It is only another way of looking at Time. There is no difference between Time and any of the three dimensions of Space except that our consciousness moves along it. But some foolish people have got hold of the wrong side of that idea. You have all heard what they have to say about this Fourth Dimension?'

'I have not,' said the Provincial Mayor.

'It is simply this. That Space, as our mathematicians have it, is spoken of as having three dimensions, which one may call Length, Breadth, and Thickness, and is always definable by reference to three planes, each at right angles to the others. But some philosophical people have been asking why three dimensions particularly-why not another direction at right angles to the other three?-and have even tried to construct a Four-Dimension geometry. Professor Simon Newcomb was expounding this to the New York Mathematical Society only a month or so ago. You know how on a flat surface, which has only two dimensions, we can represent a figure of a three-dimensional solid, and similarly they think that by models of three dimensions they could represent one of four-if they could master the perspective of the thing. See?'

'I think so,' murmured the Provincial Mayor; and, knitting his brows, he lapsed into an introspective state, his lips moving as one who repeats mystic works. 'Yes, I think I see it now,' he said after some time, brightening in a quite transitory manner.

'Well, I do not mind telling you I have been at work upon this geometry of Four Dimensions for some time. Some of my results are curious. For instance, here is a portrait of a man at eight years old, another at fifteen, another at seventeen, another at twenty-three, and so on. All these are evidently sections, as it were, Three-Dimensional representations of his Four-Dimensioned being, which is a fixed and unalterable thing.'