The United Nations has designated the 1990s as "The Decade of the Brain." We have learned much about the brain's many wonders, but there is still much, much more to learn ...

Questions like these were what began this theory. I thought that if I could explain what makes people think they way they do, it would explain why they acted the way they did. If I could explain this, then I could help people figure themselves out. If they could figure themselves out, then they could understand themselves. That was the initial purpose of this theory. In fact, it did not even start out as a theory. It began as a letter to someone. I was concerned about someone and thought I could help by telling her that I thought I understood her. I wanted to explain that the reason she was feeling the way she was, was because of "who" she was. Not the who on the surface, but the who inside. Too many pages later, I came to the conclusion that it was very difficult to explain in words. It was then that I decided to try and draw it. "A picture is worth a thousand words."

Why do people think the way they do?

I believe it has to do with "how much" a person has to think about. The more you have to think about, the more you have to think about. Also, some people seem more able to think "dimensionally" than others. What do I mean by that? To use the stereogram as an analogy, some people are only able (or only know to because that is what they have learned) to look at the picture on the surface, where some know that in order to see the "true" picture, you must look inside. Some people are able to listen past the story or lyrics on the surface, into the words to hear what the person is really saying or singing about. It is amazing what you can hear when you really listen, and what you can see when you really look. This concept of "into" gives thought depth. With depth comes dimension.

Once I figured out that thought is about "how much" and "dimension", I decided to try and draw 'The Mind' - to portray the mind as a 3-dimensional object showing Length x Width x Height, thereby giving the Volume, or the "how much."

What makes up the mind?

First, the pieces of the puzzle must be determined. These are the components that I believe make up the mind:

The next step is to portray these components in a diagram - a model representation.

Each of the three above components represents an axis: 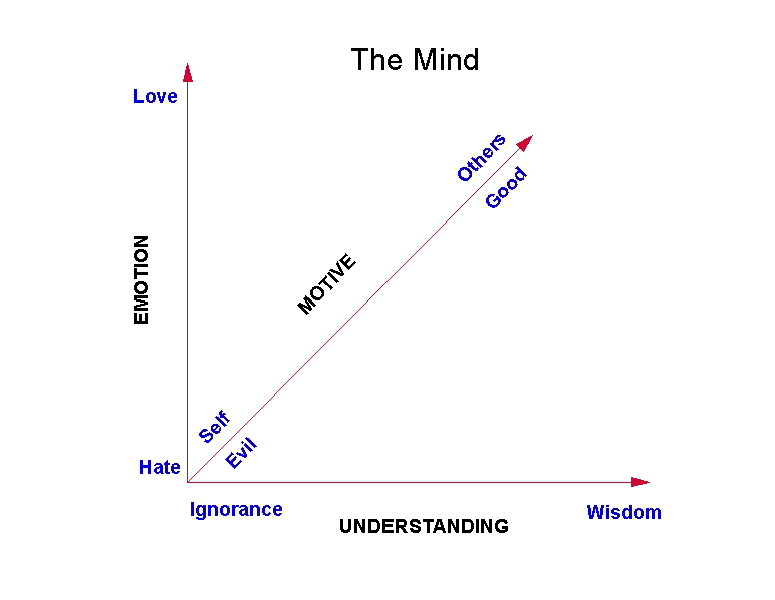 The following diagram is a more detailed representation of the previous. Please study this diagram carefully because I will not be describing it in great detail at this time as it is basically self-explanatory. 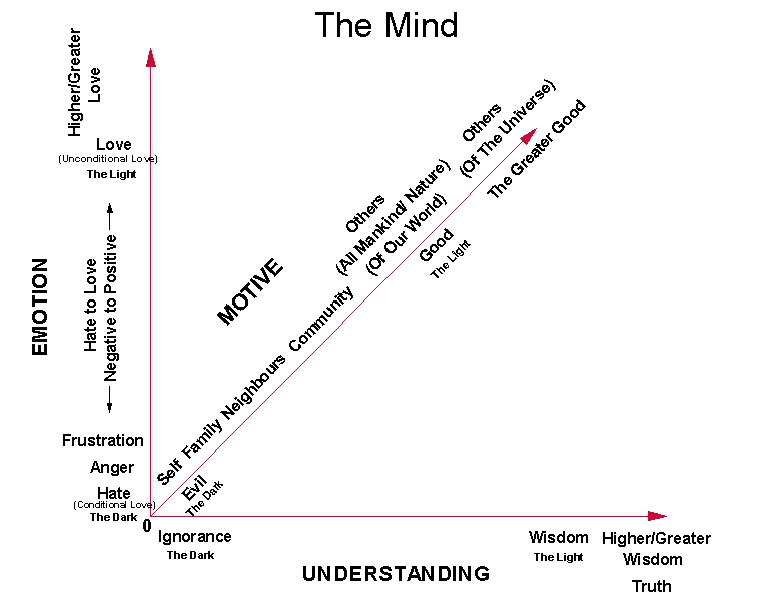 Also note that all emotions are not explicitly listed, but are intended to be represented in ascending order starting at Point 0 from the negative to increasing positive emotions, from 'Hate' to 'Love'.

As I stated earlier, it is not the fact whether you have learned the emotion or not, because everyone has experienced most emotions to some extent, but rather, it is the amounts that you have learned that are important. In order to explain what I mean, I will represent this in the diagram, however, for the remainder of this theory presentation, I will exclude this portion in the majority of the following diagrams for ease of viewing. 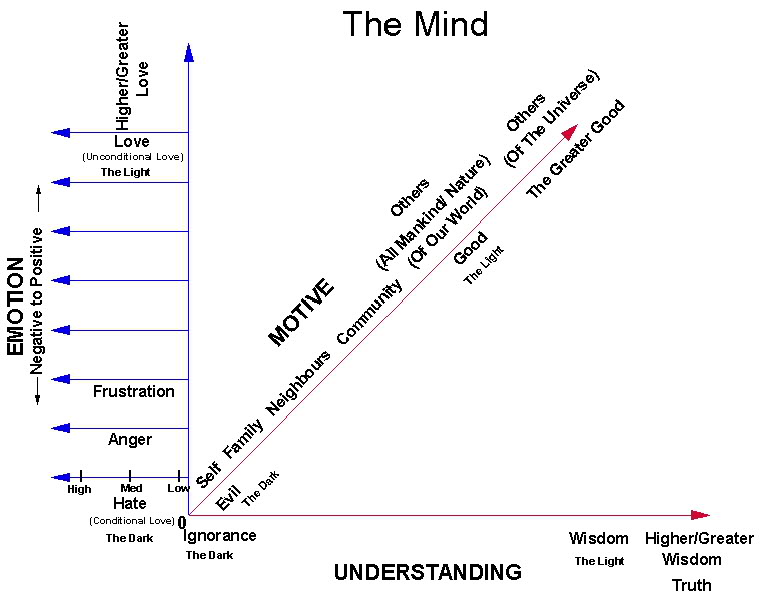 Now that I have explained what I believe to be the three components of the mind, and represented and described these components in basically a 2-dimensional diagram format, I will now continue on to expand the theory and diagram and answer the fundamental questions.