If the stars in the Constellation of Orion are strategically, specifically, and scientifically placed, then...
WHO placed them there?

In Chapter 8 I said:

I believe that this has now in fact been accomplished. I believe that now we can look to the Heavens and see God - or at least scientific proof of His Handiwork.

I believe that the Constellation of ORION is scientific proof of God's existence. In this chapter, I will show you how.

This entire paper has dealt with The Mind and with GOD through the concept of the 'Box' as shown in this diagram:

And in this Slideshow Presentation:


I now wish to take this 'Box Concept' a step further and use it to PROVE God's existence. I do not need to prove it for myself because I already know that He exists, but in case you do not, then perhaps this will help you to see...

While I was writing Chapter 13 on 11:11 earlier this month of November 2000, I had occasion to reread the book The Message Of The Sphinx by Robert Bauval and Graham Hancock. (Mr. Bauval is famous for making the connection between the Egyptian Pyramids at Giza, Egypt and the Constellation of Orion, with the three pyramids corresponding to the three stars of Orion's Belt, as well as other correlating structures with stars in that constellation. See the book The Orion Mystery.)


While I was thinking about the 'Box Concept' and reviewing the information in this book, I noticed something. What caught my attention was the picture that was created using just these points of the box: x, y, z, (x,y), (x,z), and (y,z). As you can see in the following diagram, the picture that is created resembles an Hour Glass. (Again bringing in the "Time Running Out / 11th Hour" connection as described in Chapter 13 - 11:11.)

It looks like an Hour Glass, but it also reminded me of something else...

It reminded me of the Constellation of Orion:

I wondered if I could create a 'Box' with Orion using the various stars as points of the box. The results were amazing. I was able to create a 3-Dimensional Box as shown in this next diagram:

In order to understand this 3-dimensional drawing better, try to draw it yourself. You will need a copy of the Constellation of Orion, a pencil and a ruler. A protractor will also be useful to measure angles.

Draw the lines of the box as follows:

7. All the remaining lines, including the three axes X, Y and Z, can be completed using the Box principles of equal sides and right angles.  (Take into consideration the perspective from which the box is being looked at in drawing these lines.)
- Axis X = Point 0 to x (Saiph)
- Axis Y = Point 0 to y (Betelgeuse)
- Axis Z = Point 0 to z (Al Nitak)

Once you have completed your drawing, compare your results as follows:


7. If you find the mid-point of each side (on each of the 6 sides draw diagonal lines from corner to corner with the point of intersection being the mid-point of that side) and then if you draw 3 lines from these mid-points (top to bottom, front to back, side to side) you will find that the exact center of the box is Alnilam (the center star in Orion's Belt).

* This is even further proof that these stars were specifically placed!

To take this diagram one step further, the Orion lines which form a triangle on the BACK of the Box could be duplicated on the FRONT to create a "roof."  This could symbolize various religious themes such as:

I believe the fact that there are many 111 degree angles incorporated into the Constellation of Orion as depicted in this diagram is also significant. Not only does it make a further connection to the 11:11 information found in Chapter 13, but according to the book The Message Of The Sphinx the number 111 is significant in several ways, one example being as follows:

The problem, however, is that the number 111.111 may well not be an arbitrary value. At any rate, it has long been recognized that the main numerical factor in the design of the Great Pyramid, and indeed of the Giza necropolis as a whole, is the prime number 11.

Some of these 111 degree angles are as follows:

NOTE:
Orion straddles the Celestial Equator. Alnilam, the center star of Orion's Belt and the exact center of the Box, is located at -1 degree 11" (again the 111).


As shown previously in this paper, Point (x,y,z) is the most significant point of the Box. It is at this point where all 3 axes meet. Using this point in the concept of The Mind, Point (x,y,z) represents "The Eye."  This is our "Point of View" or "Point of Perspective" of Seeing (visually) and Seeing (understanding).  Taking this Point (x,y,z) to infinity represents God's Mind  - "The ALL-SEEING Eye." 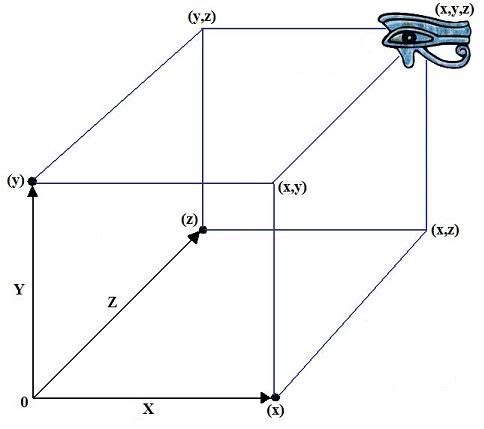 Mr. Bauval made the connection to the Pyramids of Giza and Orion. Perhaps Point (x,y,z) points to a specific location in this necropolis where something significant (Hall of Records) may be found?

After countless hours of drawings, measurements, and calculations, and thanks to Google Earth, I have been able to pinpoint the coordinates of the general location of where I believe the Hall of Records to be located. The line from point (x,y) - Pyramid Menkaure - to point (x,y,z) - the Hall of Records - lies 14° South of West and is approximately 1.62 miles (1.618 = Phi): 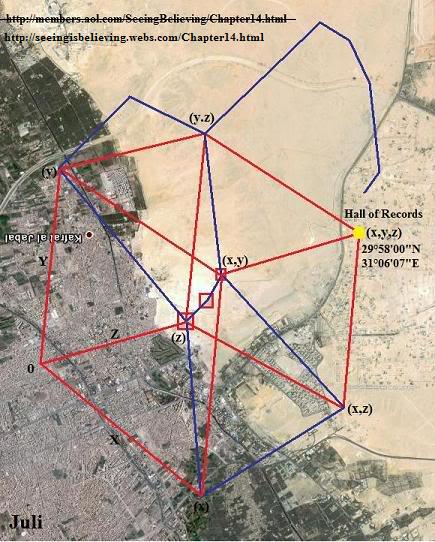 Nevertheless, what is most significant here is the fact that this information may scientifically prove the existence of God. If these stars in the Constellation of Orion were specifically and purposefully placed, then there is NO ONE ELSE who could have placed them there.

Genesis 1:1
In the beginning, God created the heaven and the earth.

Genesis 1:14
And God said,
Let there be lights in the firmament of heaven
to divide the day from the night;
and let them be for signs,
and for seasons, and for days, and years.

Amos 5:8
Seek him that maketh the seven stars and Orion:
The LORD is his name.

In searching the Bible for more references to Orion, I came across this scripture:


Job 9:9
Which maketh Arcturus, Orion, and Pleiades, and the chambers of the south.

I wondered if this was perhaps another "clue to follow" - another "dot to connect." I wondered what these three star groups - Arcturus (in the Constellation Bootes), Orion, and Pleiades - had in common, or if anything linked them together. I decided to do just that - link them together - connect the dots - to see what I could see.

I went to my astronomy computer program RedShift and created a view of the sky in which all three groups could be seen at the same time. I printed off a copy of this skyview and, taking my pencil and ruler, joined the three together to form a triangle. I wondered what I was "supposed" to be seeing as nothing  immediately made a connection with me. Then, in the top left hand corner, I noticed something... A small triangular shape of stars called Triangulum.

I wondered if this could perhaps be the connection...

I returned to the RedShift computer program to the skyview I had just created, and zoomed in on Triangulum. This was amazing. The triangle that I had just drawn with Arcturus, Orion, and Pleiades looked exactly the same as this. I wondered if this could be possible. Did it just look exactly the same, or was it exactly the same?

I kept adjusting the zoom on Triangulum and printing copies until I had a copy that was exactly the same size as the triangle I had just drawn. I superimposed the two and, YES, they were exactly the same!

As well, I measured the angles of this triangle, and they are 90, 73, and 17 degrees. The fact that this is not just an ordinary triangle, but a right-angle triangle, is also scientifically significant.

The clues and evidence of God's existence are everywhere - if you just open your eyes - and your mind - and SEE!