The purpose of this paper is to introduce and present my theory and model representation of that theory to the world. I give you this theory to provide a new perspective, a new foundation on which to build. I give you this theory with the hope that it will provide a new awareness for mankind and a path towards understanding, peace, and happiness into the new millennium.

For this reason, I have decided to present this theory in the same manner as it was developed. I believe that it is important for you to "experience" the same process of discoveries, realizations, and understandings that I did, in order to truly understand. For this reason, I ask that you read this theory from beginning to end, without searching through or reading the end first, because without the journey, you will not reach the destination.

Update: Since this paper was first written, I found it necessary to write a Summary of the paper - a "Reader's Digest condensed version" - due to its length. In doing so, I have basically defeated the above purpose. It was my original intention to write this paper as a gradual process of "opening the mind." For this reason, the first section of this paper dealt only with The Mind and did not make any reference to God. It was my hope to gradually open people's minds so that by the time the paper opened into the subject of God, people would at least be interested enough to continue and open-minded enough to at least consider the information. Even though the "journey" and "destination" are now known, before the journey even begins, I have decided to leave the paper as is. Please keep this in mind as you continue.

The ideas and information contained in this paper deal with issues and questions that have been of great interest, wonder, mystery, concern, and even torment to mankind ever since the beginning of our time. The general philosophies that form the basis of this theory are no different than those which have already been discussed and believed to be true by many throughout history. The pieces of the puzzle are the same. What is different about this theory is the method that I have used to explain these philosophies. I have taken the philosophies - the pieces of the puzzle, and using science, I have actually drawn a picture. Not just a picture, but a multidimensional diagram - a model representation of the philosophies - one that I believe may answer many of man's fundamental questions and solve many of our mysteries.

For this reason, I have entitled this paper, 'A Theory: Both Old And New'. The "Old" refers to the philosophies. They are the same. The "New" refers to the diagram that I have drawn which represents and explains these philosophies. It is the combination of the two that provides the answers to the questions. To my knowledge, this has not been done before.

As I stated previously, this theory began as a theory of 'The Mind'. It was only as I was developing the model representation of this theory that I realized its scope was so much greater.  I do not know what the impact of this theory will be. I believe it has the potential of having great significance - maybe even change the world? That will be up to you to decide. In fact, it will be up to you, to me, to all of us.

In order to understand this theory and its potential impact, even to read it or listen to it, you must be very open-minded because, quite literally, that is what it is all about. I hope the world is ready. I think it is, in fact, I believe the world has been hoping for it, perhaps even expecting it?

"And the tide rushes by where we stand,
And the earth underneath turns to sand,
And we're waiting for someone to see"

Riverwide From the Album The Globe Sessions (1998)

The question will be asked, "Why you? If man has been asking these questions since the beginning of time, how and why do you think you could possibly have figured out the answers?" I certainly am not a genius, and perhaps my theory will be ignored because many will believe that I do not have the credentials or qualifications, however, please consider this:

A few years ago, the world was introduced to a new technology, one that had a profound and inspirational affect on me. This was the invention of 3-dimensional pictures, or stereograms. These are pictures that when first glanced at in the way that you would normally look at a picture, in the flat surface ... L x W ... 2-dimensional method, you see a picture of patterns and designs. However, when you focus past the surface, into the picture, when you look at the picture 3-dimensionally, a whole new image amazingly appears before your eyes. This is what the picture is really about - not the patterns and designs on the surface, but the image that is inside the picture. My point is this: If you simply look at something the way you always have, the way that man has from the beginning of time, you may not be able to see the "true" picture. It may take someone looking at these questions from a different perspective in order to "see" the answers. And "perspective" and "seeing (visually) in order to see (understand)" are very important components of this theory.

To Tell or Not To Tell?

"To tell or not to tell. That is the question." The ultimate moral dilemma. When I first began this theory, these were my thoughts. For the good of mankind, maybe I should not. Is it not the journey that is important - not the destination? I wondered, by giving these answers, will I have ruined the journey? I concluded that no, it will not. It will just change the journey and give it direction - "a new path towards understanding, peace, and happiness." My decision was further validated when my grandmother arrived for Christmas. After having traveled all day, she was exhausted when she arrived, and she said to me, "I am so glad that I'm finally here. Traveling is so tiring." I immediately thought, "So it is the destination that is important." The world is tired, weary of the journey, lost. It needs a new hope. It needs a new direction. That is why I am telling. For the good of mankind. For the "Greater Good."

Then, as I became aware of the true scope of this theory, I realized two things:

1) It is the destination, without any question, that is important. But the journey is just as important, as it is this journey that enables you to reach that destination.

2) I knew that I had no choice but to tell. Actually, that is not true. According to my theory, I do have the choice, and  I choose to tell.

Can you see the images inside of these stereograms?

Bring your face close to this picture until it is out of focus.
Without changing your focus, slowly move back and suddenly a hidden 3-D image will appear before your very eyes.
(Note: These images are connected to Chapter 13 - 11:11.) 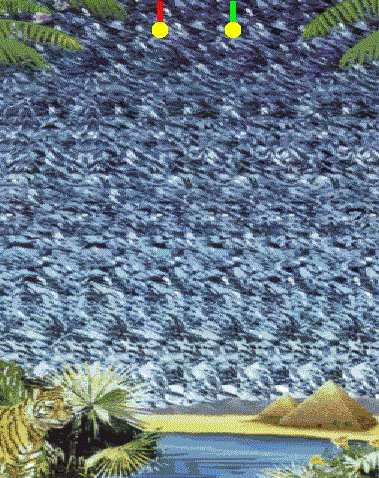